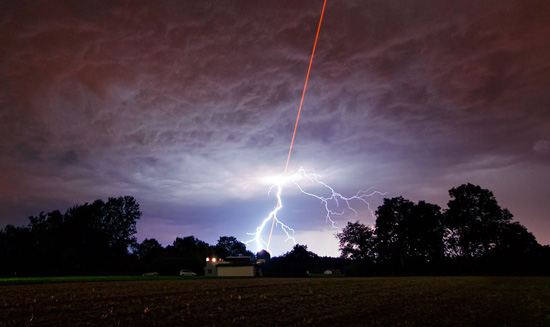 On Thursday 18 August, the sky above the Allgäu Public Observatory in southwestern Bavaria was an amazing sight, with the night lit up by two very different phenomena: one an example of advanced technology, and the other of nature’s dramatic power.

As ESO tested the new Wendelstein laser guide star unit by shooting a powerful laser beam into the atmosphere, one of the region’s intense summer thunderstorms was approaching. Heavy grey clouds threw down bolts of lightning resulting in a breathtaking image that looks like a scene from a science fiction movie.